Chris and Kerry Cole are Christian media pioneers in the UK who received a prophetic word about “reaching thousands, no millions for Christ in media.” They are the founders of Cross Rhythms  Radio and Media Ministry and Cornerstone Vision. Their autobiography Gotta Die to Live was published in 2020 and they are passionate about all believers finding their value, identity and purpose in God.

Chris Cole, FRSA  has held leadership positions at GOD TV, UCB and CBC.  He was born in London in 1952 and grew up in Canada, USA and UK. He moved to Belgium as a young man where he worked in executive recruitment. He also owned a night club and worked as a DJ. Following his conversion to Christianity he returned to Plymouth where he met Kerry and they married in 1982.

Christian Contemporary Music (CCM) was starting to become popular in the UK and Chris saw its potential to reach a mass audience. This led him to host a show on Plymouth Sound called ‘The Solid Rock of Jesus Christ’. He was one of the first to promote CCM and Gospel artists at a time when ‘Christian rock’ was not always well received among church leaders.

This led Chris and Kerry to start Cross Rhythms  in 1983. It was named after a music magazine founded by Tony Cummings and became part of the media vehicle of radio, print journalism and music festivals in the South West. The couple also started Cornerstone House Advertising and Marketing in Plymouth in 1985 to help finance their media venture. Cornerstone House published newspapers for the Church of England and other denominations and later became Cornerstone Vision Limited.

In 1991 Chris was appointed to the board of Gilead Foundations, a drug rehabilitation charity in Okehampton.  In the 1990s Cross Rhythms moved to Stoke on Trent where its headquarters is now based. This came about through a partnership with UCB where Chris acted as Executive Director and Trustee from 1996 to 2002.

He was the first broadcaster to obtain a community radio licence from the British government in 2001. While he was in Stoke on Trent Chris also became a regular host of GOD TV’s series, ‘Dream on TV’. In 2005 he was appointed as GOD TV’s Regional Director for the UK & Ireland. He served in this position until 2012. He was appointed a trustee of the Angel Foundation in 2015, GOD TV’s charity in the UK. As of 2021 continues as part of the leadership of Cornerstone Vision which publishes the Plymouth Chronicle.

Chris  became a Fellow of the Royal Society of Arts in 2010. He is also a member of The Society of Leadership Fellows of St George’s House (Windsor Castle).  Chris has also been recognized by the CBC for his contribution to broadcasting in the UK.

Kerry Cole has authored three books, The Purple Veil, Exit Darcus and Gotta Die to Live.  She is a gifted creative who uses poetry, art, fictional to express her personal faith in Jesus and share His power to change lives. Chris and Kerry Cole pastor a local church Cornerstone Fellowship together. They have three daughters and three grandchildren.

Chris and Kerry are available for speaking engagements via Zoom. To book them to speak contact, email hello@chrisandkerrycole.com

Rev Canon Jonathan Alderton Ford is a Christian leader, broadcaster and author.  He has served the Church of England since 1985. Prior to that he was a missionary and has a background in Insurance. Jonathan has been in his present parish for over 30 years and has seen many people… 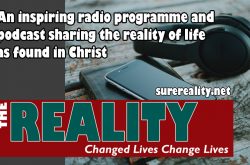 The Reality is a Christian talk show featuring folks from all walks of life whose lives have been touched and changed for the good, for good by the reality of Christ. Colossians 2:17These are a shadow of the things to come, but the reality is found in Christ. The Reality… Read more…